When mixing new and old raw materials, pay special attention to the uniformity of mixing, and at the same time, try to select raw materials with similar melt indexes for mixing. If the melt index of the raw materials differs too much, the melting temperature will differ greatly. During the plasticizing and extrusion process, the plasticization can not be uniform at the same time, which will seriously affect the stretching and cause the quality of the flat yarn to decrease. At the same time, the broken wire rate and the reject rate are high. Production [3]. During the mixing process, pay attention to the drying time and temperature of the raw materials. The mixing situation of Guangxi Huasu Group Co., Ltd.: mixing power 37.5KW, feeding 125kg, drying time about 20min, and drying temperature about 100℃.

The wire drawing process route is: after the raw material enters the extruder, it is heated by the barrel and the mutual shearing action of the screw and the barrel, and becomes a molten state in an almost completely plasticized state, and is extruded into a film through a die. After cooling, it is cut into embryo silk with a blade, and stretched in an oven to form a flat yarn; the flat yarn is heat-set, shrinks at a low traction speed, and processed at low temperature, and finally reeled into a winding system. The film forming methods of the wire drawing process include tube film method and flat film method. At present, the flat film method is mostly used; the cooling methods after film formation include air cooling, water cooling and indirect cooling, and the water cooling method is more commonly used. ; Draft heating methods include hot plate, hot roller, and hot air. At present, the hot plate method is more commonly used; winding forming includes concentrated cycloid winding, single-spindle torque motor winding, magnetic torque winding and cam combined energy saving Winding machine, currently used more is the cam combined energy-saving winding machine. 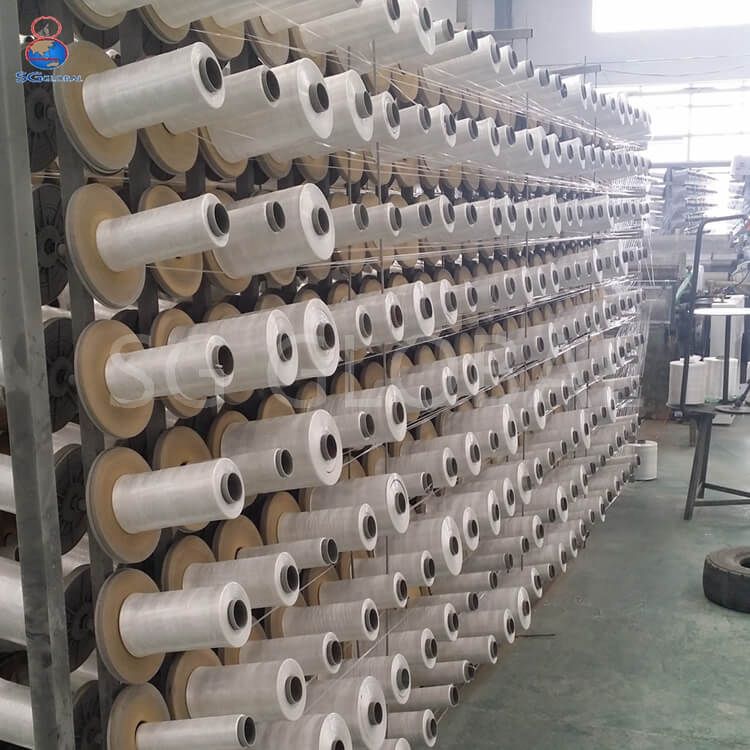 The pulling ratio is the ratio of the pulling speed of the extruded film to the speed of extruding from the film mouth. By controlling the pulling ratio, the film is slightly oriented in the pulling direction. Under normal circumstances, the traction ratio should be kept at 1:4-8, and the commonly used one is 1:6.0-6.5. The blow-up ratio refers to the ratio of the diameter of the bubble blown out of the tube film to the original die diameter during blowing. From a theoretical point of view, the larger the blow-up ratio, the better the film's transverse stretch orientation and the better the tensile strength. However, in actual production, it should not be too high to avoid snake-like oscillation, lower uniformity, and unequal film thickness. , Wrinkles etc. appear. Under normal circumstances, the inflation ratio should be controlled between 2.0-3.5, and the maximum should not exceed 8. The drafting ratio is also called the drafting ratio (drawing ratio), which refers to the length multiple of the draft of the divided filament (blank) per unit length when the flat yarn is drawn, or it is described as the drafting (two draft) speed and traction (one Pull) the ratio of speed. The draft ratio is the most important process index in wire drawing production. The drawing of the flat yarn is a uniaxial stretching below the melting point temperature. The stretching process is an orientation process so that the flat yarn can obtain high strength and other physical and mechanical properties. Under normal circumstances, the draft ratio is controlled at 4-7 times. For flat yarns with special needs, the draft ratio can reach 11 times. Retraction ratio (or setting ratio) refers to the ratio of the pulling speed of the flat yarn to the pulling speed. The pulling speed should be lower than the pulling speed, so as to re-heat the flat wire to set a retraction amount, so that the internal stress of the flat wire is eliminated, and a strong tensile force and excellent elongation can be obtained. Under normal circumstances, the retraction ratio is between 0.96-0.99. In the flat film drawing process, the traction ratio, draft ratio and retraction ratio are controlled by gears. In actual production, the temperature, speed, traction ratio and draft ratio of recycled materials are lower or smaller than those of new materials. The product complies with GB/T8946-1998 "Polypropylene woven bag" type B bag standard;

The knitting process is the process of knitting the warp and weft yarns into a cloth through a circular loom.